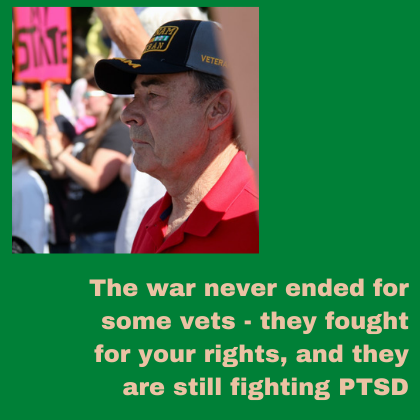 Please Copy, Paste, and email to the NC Senator and Representative(s) in your county

To find their email, go to https://www.ncleg.gov/FindYourLegislators and scroll down to “By County” and choose your county in the dropdown.

I am reaching out to you today to talk about our Veterans, specifically those suffering from Post Traumatic Stress Disorder (PTSD); an often chronic condition for which currently available medications have limited efficacy or can even make symptoms worse. Cannabis has been found to be extremely effective for sufferers of PTSD providing immediate and lasting relief that other medications don’t provide for Veterans.

Several studies show cannabis has proven medicinal properties, including relieving post-traumatic stress disorder (PTSD) symptoms, and in 20 of the 36 states that have legalized medical marijuana, doctors can recommend cannabis for PTSD. Currently, North Carolina is not one of those states and unfortunately, cannabis has not been legalized at the federal level. This means those who may need it most can’t get a prescription for it. In that category fall the brave Americans who have served our country as Soldiers, Sailors, Airmen, and Marines.

Many Veterans suffer physical and emotional traumas. These traumas may be relieved by a treatment course that includes medical marijuana.  Some quick points to consider:

Below are a few excerpts (and associated links) from reputable institutions to articles that further breakdown the benefits that Cannabis has in the treatment (and healing) of PTSD.

Medical Cannabis is available to a majority of Americans but North Carolinians don’t have equal liberty or access to it. To make matters worse, although decriminalized to some extent, cannabis in the state is still considered highly illegal, (growing even a single plant for personal use is a felony). This puts many Veterans and other North Carolinians, suffering from PTSD, in a position of having to choose between committing a crime or using a safe, natural, and effective form of therapy to combat suicide and treat their own mental health. Our Veterans have answered the Nation’s call to service, many during a period of active armed conflict or war. They shouldn’t have to risk all of the negative impacts that come with a criminal conviction in order to treat mental and physical injuries that resulted from defending our Nation.