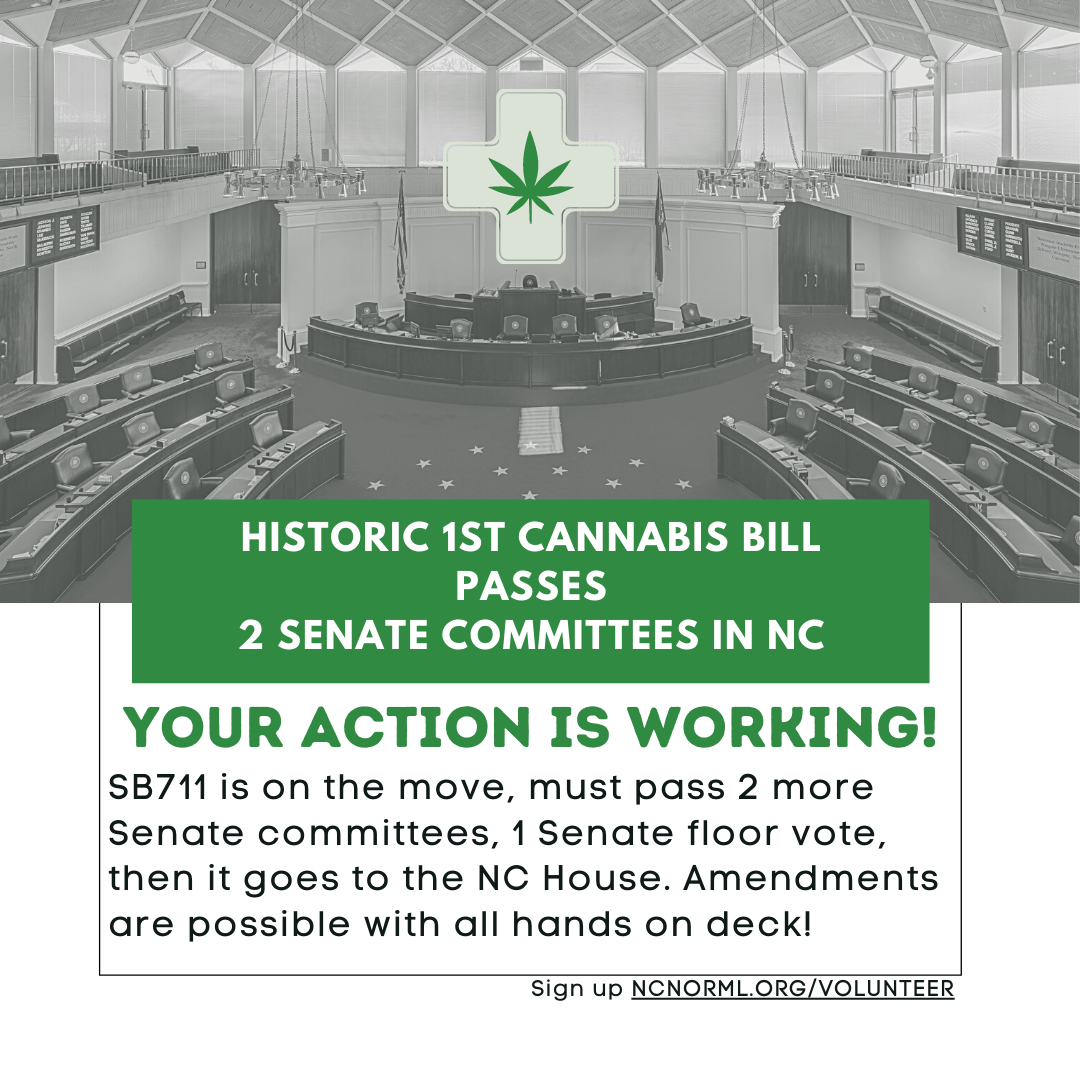 Your action is working because, for the 1st time ever, cannabis legislation is on the move in NC!

SB711 passed its second committee vote in Senate Finance on voice vote (1 No vote). 2 more senate committees, 1 Senate floor vote, and then a full repeat in the NC House remain. Amendments are possible, but not without all hands on deck.

SB711 establishes a very restrictive framework to legalize medical cannabis for a limited number of medical conditions. It will take a few years to fully implement, but when enacted will demonstrate that legalized medical cannabis is less scary than opponents believe. Most of the >1 million cannabis users in NC will need to continue their existing cannabis arrangement until we can add more medical conditions (see definitions of SB711). The good news is that it establishes a process to include more medical conditions that we will pursue without needing to go back through the General Assembly. It will require detailed labeling so patients will know the quality of the cannabis.  The NCGA fiscal staff was unable to make a fiscal impact projection because states enacted various taxes and fees so there is not currently a valid comparison.

The discussion last Wednesday was limited to the financial aspects of the bill that supports a vertical corporate structure limited to 10 licenses.  Vertical means the licensee controls from seed to sale. Large outside cannabis corporations have hired several lobbyists to advocate for the bill. We had already identified a majority of legislators who support medical cannabis before the corporate lobbyists arrived. Several other states have struggled with the invasion of corporate interests. If existing cannabis producers, processors, and retailers organize to become a unified force, it is possible to change the bill in the House to expand opportunities for small business.

During my decades in the NCGA I’ve witnessed how easy it is to accidentally completely kill a bill, so a thoughtful strategy would be important. While there are shortcomings in SB711, it would finally legalize medical cannabis in NC! As we know from the other states already there, cannabis legalization never moves backwards.

NC NORML will continue to work to expand the number of medical conditions and to educate legislators generally to end the criminalization of cannabis use. We anticipate SB711 will pass the Senate. Several ongoing cannabis bill sponsors, repeatedly introducing cannabis bills, have publicly thanked Senator Rabon for introducing a bill, demonstrating that SB711 is worth the efforts to pass SB711.

The House has until next summer to hold committee and floor votes on SB711. Unfortunately, some of the House committee chairs who are in positions to block SB711 aren’t among our supporters yet. We’ll be asking you to continue contacting your and other members of the NCGA through these weekly nuggets.

North Carolina doesn’t allow voter initiated referendums so convincing legislators is our only path to change cannabis laws. I’m honored to volunteer for NC NORML to continue pushing for North Carolinians’ access to high-quality, affordable cannabis balancing the possible with our goal!