A Tale of Two States? 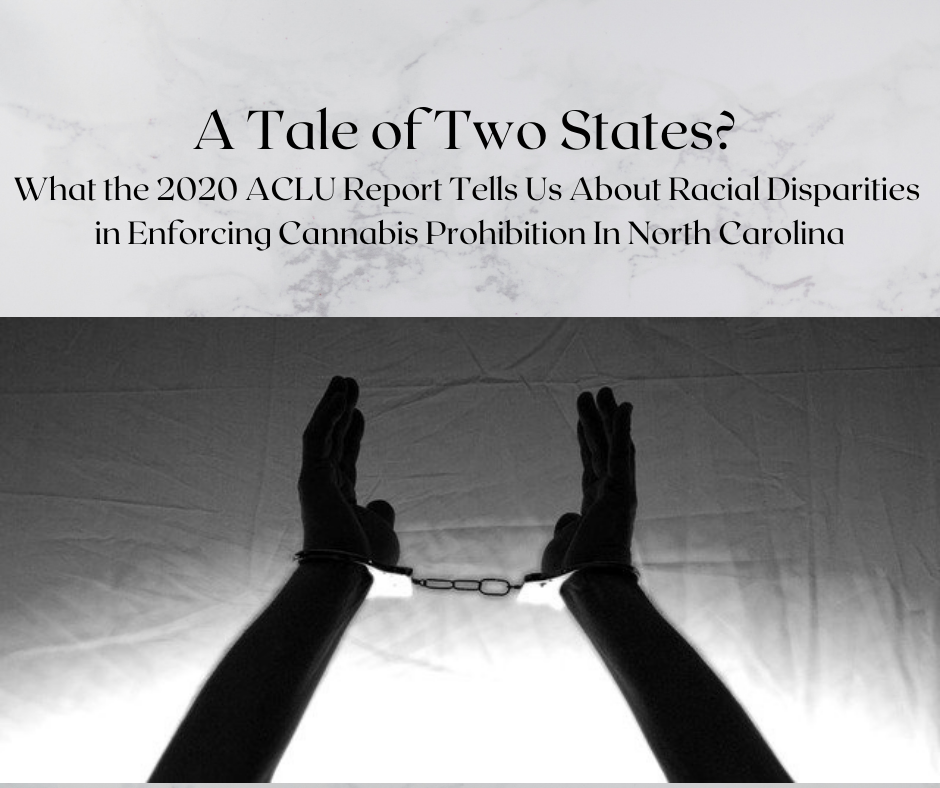 In 2013 the ACLU published The War on Marijuana in Black and White which examined the years 2001 to 2010 (by 2010, 13 states and the District of Columbia had legalized medical marijuana, and 17 states had decriminalized possession). This report documented over 8 million arrests for marijuana during those years, equaling one arrest every 37 seconds. While cannabis use was acknowledged to be about equal amongst people of all races, the report found that Blacks were 3.73 times more likely to be arrested for marijuana-related reasons. The cost of enforcing marijuana laws across the US was $3.6 billion annually. With regard to North Carolina specifically, they noted that in 2010, Blacks accounted for 22% of the state’s population and for 50% of the arrests for possession of marijuana.

The ACLU 2020 report A Tale of Two Countries: Racially Targeted Arrests in the Era of Marijuana Reform, details marijuana arrests from 2010 to 2018 and examines racial disparities at the national, state, and county levels. The report is based on the Federal Bureau of Investigation’s Uniform Crime Reporting Program (UCR), supplementary data from jurisdictions not included in UCR, and the United States Census’ annual county population estimates to document arrest rates per 100,000 people for marijuana possession, by race, at the state and county level.

Although arrests for marijuana charges had decreased by 18% since 2010, 6.1 million arrests were made during the last 8 years, nationwide. A Black person is still 3.64 times more likely to be charged with possession, and racial disparities in arrests remain even in states that have moved to legalize medical marijuana and/or decriminalize adult possession and use.

In 2015, the New York Times published “The Disproportionate Risks of Driving While Black” which examined traffic stops and arrests in Greensboro, NC (North Carolina and Greensboro were chosen as the focus of the article because NC collects the most detailed data on traffic stops, and had “tens of thousands of traffic stops and years of arrest data”). Law enforcement officers in Greensboro were significantly more likely to stop Black drivers over traffic violations, and were twice as likely to search them or their cars, even though drugs and weapons were more likely to be found on white drivers. The article tells how a routine traffic stop in 2013 impacted the lives of the Scales brothers to illustrate the damaging impact of disparate enforcement of laws. Their encounter with Greensboro police led to one brother stunned by a taser shock, after which he was dragged across the asphalt resulting in a chipped tooth and a split lip that required 5 stitches. He was charged with assaulting an officer (charges later dismissed) and 4 traffic violations. The younger Scales brother reported that even several years later he did not feel safe around police.

Although North Carolina “decriminalized” possession of small amounts of marijuana in 1977 (possession of half an ounce or less is a Class 3 misdemeanor and a maximum fine of $200. Any sentence of imprisonment imposed for this offense must be suspended. Possession of 0.51 to 1.5 ounces is a Class 1 misdemeanor punishable by 1 to 45 days imprisonment and a discretionary fine for a first offense, and maximum fine of $1000. Possession of over 1.5 ounces but less than or equal to 10 pounds is a Class I felony punishable by 3 to 8 months imprisonment and a discretionary fine for a first offense), the number of people charged with possession in 2019 is still shocking, especially compared with the numbers for other misdemeanors (including violent and nonviolent). The University School of Government report Detailed North Carolina Statewide & County-Level Criminal Charging Data examined arrest data from the North Carolina Office of the Courts 2019 “Tally Report” breaks down the numbers for violent and non-violent felonies and misdemeanors. The top violent misdemeanor charges were for Assault on a female = 27,315 and Simple assault = 19,436. The number charged with Possession of up to ½ ounce marijuana was 31,287; Possession of marijuana paraphernalia = 30,623; Possession of a Schedule VI controlled substance (which includes hashish and synthetic cannabinoids) = 12,883. In other words, while nearly 75,000 charges were related to victimless cannabis “crimes” in NC, 46,751 charges were brought for the top two violent misdemeanors in NC.

Every person, regardless of race, gender or political persuasion, wants to live in a society that is safe for themselves and for their families. We understand the need to arrest and prosecute those who commit violent crimes against people (murder, assault, and rape) but question whether enforcing cannabis prohibition actually makes anyone safer. In fact, we see that law enforcement can remove a sense of safety when you are part of a population that is overpoliced, and more likely to die at the hands of police, regardless of any actual crime committed.

For Federal, State, and Local Governments:

End the enforcement of marijuana possession and distribution • End racial profiling by police • Eliminate consent searches • End the practice of using raw numbers of stops, citations, summons, and arrests as a metric to measure productivity and efficacy • Develop systems for the routine collection of accurate data on a range of police practices  • Invest in nonpunitive programs and community-based services and divest from law enforcement • Develop, secure, and implement strong, independent, and effective oversight mechanisms for local law enforcement