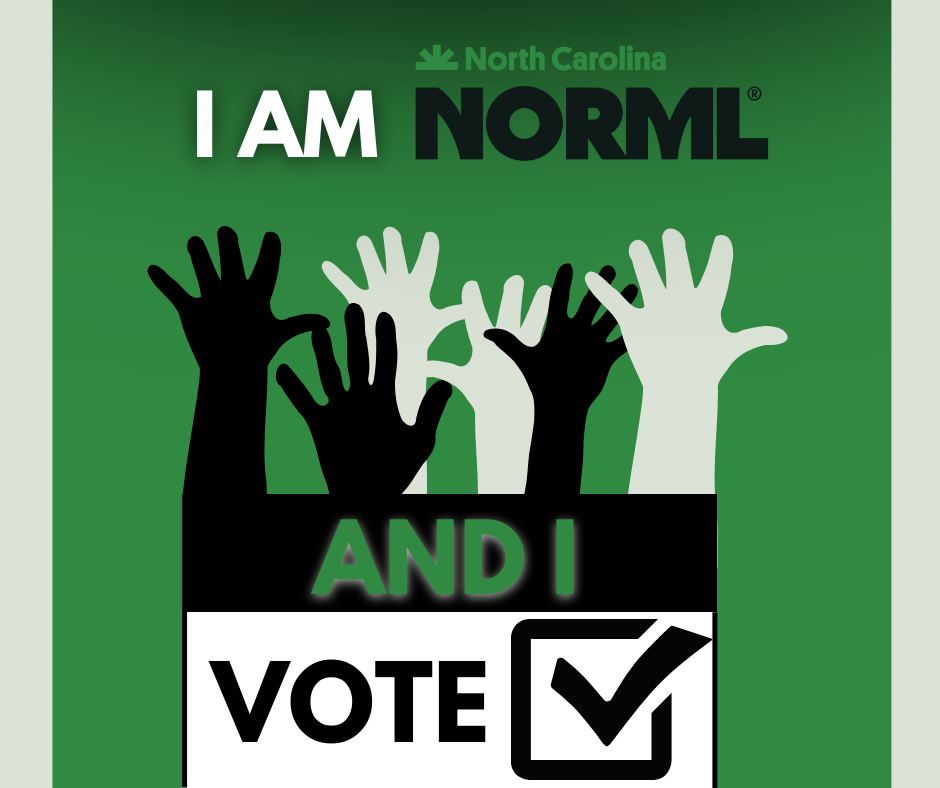 NC NORML is a non-partisan cannabis consumer advocacy organization. Constituent-initiated ballot measures are not legal in NC, therefore our only path to change our marijuana* laws is to vote for candidates who will champion cannabis legalization. Since many candidates/incumbents are reluctant to openly state their positions on legalization, Smoke the Vote is the key to empowering voters to make a fully informed decision at the ballot box in November.

North Carolina is a “purple” state with both conservative and liberal voters but for most voters, reforming our state's marijuana laws is not a partisan issue. According to a poll conducted by the NC Partnership for Reform in May, 2022, “82% of voters supported the legalization of medical marijuana” (including 75% of Republicans, 87% of Unaffiliated, and 86% of Democrats).

Smoke the Vote (StV) https://vote.norml.org/ is a repository for cannabis positions of those who are running to represent us. NC NORML is entering the information we have to make it more complete. In the 2022 General Election (11/8/2022), NC voters will elect 14 US House members, 1 US Senator, 120 members to the NC House of Representatives, and 50 members to the NC Senate.

When you pull up StV, you can opt to look at all North Carolina candidates by clicking on the state, or you can narrow the amount of information by entering your 9 digit zip code.

When the list of candidates is displayed, select a candidate’s name to see why the candidate received their grade. If the candidate has a question mark beside their name, you can help by researching them - one easy way to do this is to ask them on social media, and let us know at vote.norml.org/states/nc - be sure to include links, screenshots, or whatever you have documented.

NC NORML does not endorse candidates! Whenever available, link(s) to candidates’ campaign websites/Facebook pages/Twitter feeds are noted on StV, and we encourage you to research them. Candidates for the NC General Assembly are rated based on their responses to NC NORML’s 2022 Questionnaire (if completed), public statements, sponsorship of bills and votes on key bills if they have previously held office. Our volunteers have been working overtime to ensure that ratings are documentable and linked to votes, bill sponsorships, campaign websites and public statements in the media (including social media).

C Expressed public support for medical marijuana, but only non-smokable or medical forms.

D Has expressed no public support for significant marijuana law reform but may have sponsored and/or voted in favor of CBD/Hemp specific bills.

F Public opposition to significant marijuana law reform (adult use, medical, and/or decriminalization) but may have sponsored and/or voted in favor of CBD/Hemp specific bills.

? Has made no public statements for or against significant marijuana law reform and has no voting history.

The “Cannabis Conversation” in North Carolina began in 1977, when the General Assembly elected to “decriminalize” possession of up to ½ ounce of marijuana*.

The first “medical marijuana” study bill was introduced in 2001. Between 2001-2021 multiple medical cannabis and decriminalization bills were introduced in the NC House and/or Senate, but not voted on in either chamber.

Candidates who are running for Federal offices (US House/Senate) are rated by NORML based on separate criteria:

A+ Lead sponsor and outspoken in their public comments.

A Indicates that this candidate has publicly declared their support for the legalization and regulation of marijuana for adults; co-sponsor of legalization/depenalization legislation.

A rated Bills (None in the Senate)

B Indicates that this candidate supports policies specific to the legalization of medical cannabis and/or the decriminalization of cannabis; sponsor/co-sponsor of medical cannabis legalization legislation; outspoken in public comments about it; and/or sponsor/co-sponsor of other significant reform legislation (decriminalization at the state level, “Joyce bill” H.R. 3105 and other narrow descheduling bills at the federal level.)

C Indicates that this candidate has publicly acknowledged that states are moving forward with cannabis law reform policies and minor adjustments should be made at the federal level; co-sponsor/sponsor of ancillary legislation (e.g., the SAFE Banking Act, CLAIM Act, HOPE Act, federal research reform), supportive of smaller reforms (medical/decrim) in public statements but not a sponsor/co-sponsor.

Make sure you are registered to vote and check out election news from around the country:

*Many activists prefer the scientific term cannabis, however, we use the terms interchangeably based on context (i.e. statute and study language).