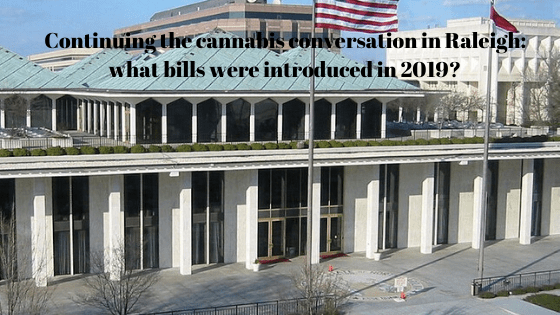 The 2019 session of the General Assembly was marred by political wrangling as the legislators feuded about the budget and redistricting. Both sides accused the other of playing politics and, as usual, cannabis got the short end of the stick.

The seven cannabis-related bills introduced in 2019 were a mixed bag of the good, the bad, and the very ugly. A brief synopsis of each bill was posted as a 5 Minute Action on 11/21/19 https://tinyurl.com/TakeAction11-21-19, here’s more detail about most of the bills with 2 exceptions: S168-Expand Allowed Medical Uses/Cannabis Extract and S315-North Carolina Farm Act of 2019 were the most seriously considered cannabis-related bills during the long session, so each of these will receive a dedicated blog post. The bills are grouped according to their impact, if passed.

The language in these bills was first introduced in the companion bills H994/S791-Revise Marijuana Laws in 2018. The great news that we can build on is that S58 had 8 sponsors/cosponsors, up from 4 for S791 and H994 had 10 sponsors/cosponsors, increased to 16 sponsors/cosponsors for H766. S58 was referred to the Committee on Rules and Operations of the Senate on 2/14/19, but was not given a hearing by committee members. H766 was referred to the Committee on Rules, Calendar, and Operations of the House on 4/16/19, but was never heard in Committee.
https://www.ncleg.gov/BillLookUp/2019/s58
https://www.ncleg.gov/BillLookUp/2019/h766

H409-Legalize FDA-Approved Schedule VI Drugs
Filed: 3/20/19
Sponsors: Gregory F. Murphy, MD (R-9), Pat McElraft (R-13), Wayne Sasser (R-67)
This bill would make it legal to prescribe, distribute, dispense, administer, transfer, transport, possess, or use any prescription drug product containing marijuana or tetrahydrocannabinol, “for which an application has been approved under Section 505 of the Federal Food, Drug, and Cosmetic Act, as amended, provided that any such action is consistent with federal law.” The bill was referred to the Health Committee on 3/21/19; the Health Committee which was chaired at that time by Murphy. The bill was to be referred to Judiciary Committee if reported favorably in the Health Committee, then to House Rules Committee. On 4/25/19, referral to Judiciary was dropped.
https://www.ncleg.gov/BillLookUp/2019/H409

This bill has a complex history, and will be discussed in a separate post.
https://www.ncleg.gov/BillLookup/2019/S315

S352-Amend NC Controlled Substances Act
Filed 3/25/19
Sponsors: Tom McInnis (R-25), Jim Davis (R-50), Ralph Hise (R-47), Joyce Krawiec (R-31). The original bill and the first edition dealt with Schedule I (including opiates and hallucinogens) and Schedule IV drugs (including both depressant and stimulant drugs), and included more designer versions of these drugs in the definitions.
Discussed in the Senate Rules and Judiciary Committees, and passed 2 readings on the Senate before the bill was sent to the House on 5/6/19.

While this additional language may lessen the impact of the bill for farmers, handlers and processors, the implications for stores selling “smokable hemp” or for persons possessing it after purchase are potentially very serious.

The bill was re-referred to the House Rules Committee on 7/17/19, and received no further hearings in that committee.
https://www.ncleg.gov/BillLookUp/2019/S352