How can you push for cannabis law reform in 2 minutes? Tell your Congressperson we need MORE! 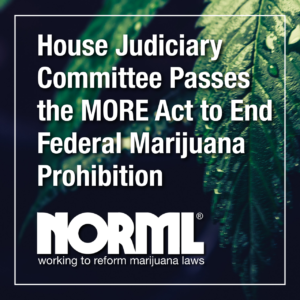 Call or email your Congressional Rep from here. Not one NC Congressional Rep has sponsored this bill.  You can also go to https://resist.bot/ and find a variety of ways to send a message to your Rep. You can simply say you would like them to join as a cosponsor for the MORE Act. If you get a response, let us know by emailing [email protected].

For the first time ever, a congressional committee has approved a piece of legislation to end marijuana prohibition in the United States. The Marijuana Opportunity, Reinvestment, and Expungement Act, better known as The MORE Act, would remove marijuana from the Controlled Substances Act and impose a minor excise tax on the legal cannabis industry to pay for the expungement of criminal records, among other changes, passed with a bipartisan vote of 24 to 10.

“This is a truly historic moment in our nation’s political history. For the first time, a Congressional committee has approved far-reaching legislation to not just put an end to federal marijuana prohibition, but to address the countless harms our prohibitionist policies have wrought, notably on communities of color and other already marginalized groups,” stated NORML Executive Director Erik Altieri, “Opposition to our failed war on marijuana has reached a boiling point with over two-thirds of all Americans, including majorities of all political persuasions, now supporting legalization. Congress should respect the will of the people and promptly approve the MORE Act and close this dark chapter of failed public policy.”

“The passage of the MORE Act represents the first time that the Judiciary Committee has ever had a successful vote to end the cruel policy of marijuana criminalization,” said NORML Political Director Justin Strekal. “Not only does the bill reverse the failed prohibition of cannabis, but it provides pathways for opportunity and ownership in the emerging industry for those who have suffered most. In 2018 alone, over 663,000 Americans were arrested for marijuana-related crimes, a three-year high. Now that Chairman Nadler has moved the MORE Act through committee, it is time for the full House to vote and have every member of Congress show their constituents which side of history they stand on.”

In the two days leading up to the vote, nearly 60,000 thousand messages to their lawmakers in support of The MORE Act through the NORML legislative action center.

The MORE Act was introduced by U.S. Representative Jerrold Nadler (D-NY) and Senator Kamala Harris (D-CA) July 23, 2019. Representative Nadler said, “It’s past time to right this wrong nationwide and work to view marijuana use as an issue of personal choice and public health, not criminal behavior.” How will the MORE Act begin to right the wrongs of cannabis prohibition?

For additional details on the bill, check out this interview with National NORML Political Director, Justin Strekal.

The fact still remains that no one has ever died from cannabis overdose, and there is a growing movement working to right the wrongs of cannabis prohibition..  Research shows that cannabis is an effective medical treatment for a number of issues plaguing our veterans, including PTSD, pain, and suicide. Removing cannabis from the Controlled Substances Act at the federal level supports what the research tells us. Despite what we know, and despite polls showing that 80% of North Carolinians support legalizing medical marijuana, not a single one of our U.S. Representatives or Senators have signed on to sponsor the MORE Act.

While this is a landmark victory for our movement, this is only the first step. The legislation must be passed by several other committees in both the Senate and the House for these changes to be made, and your Senators and Representatives are on these committees. And that’s where you come in! Your elected officials need to know what you want, because they work for you! They need to hear from so many of us that we want these changes that they know the only way to keep their jobs is to do what’s right and support the MORE Act. It’s up to all of us to tell them.