How NC Became a “Decrim” State 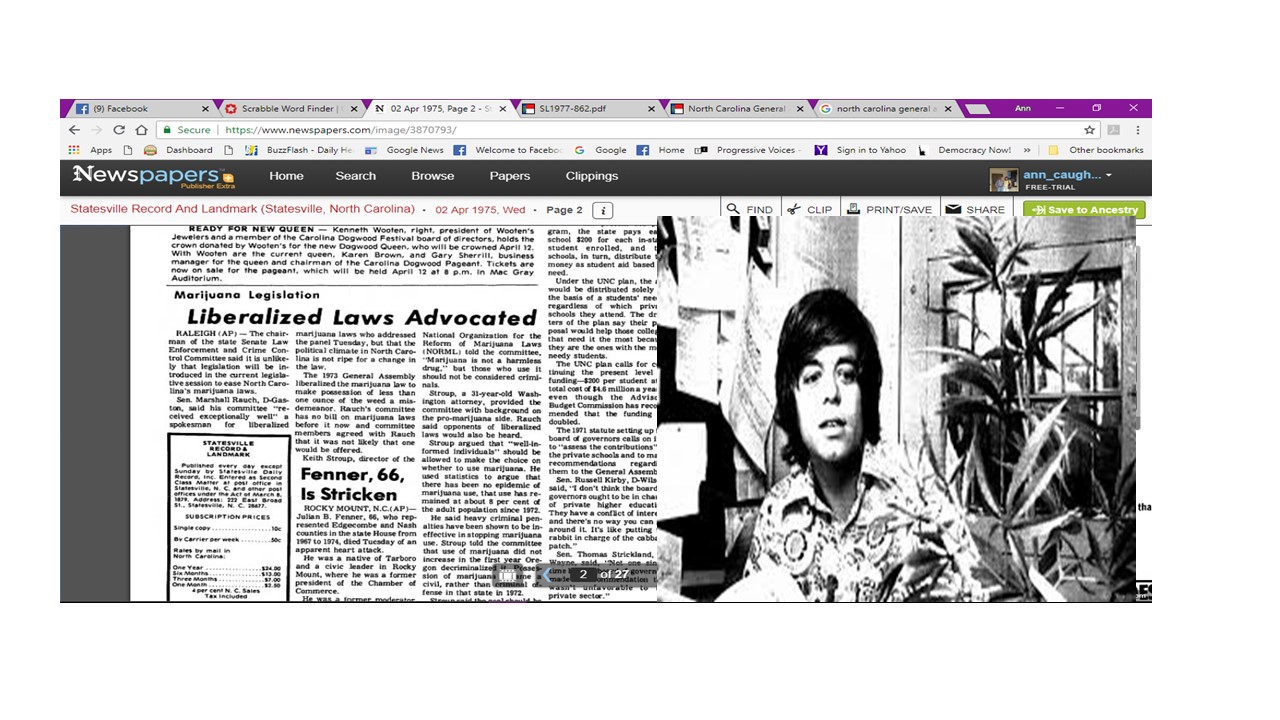 During the 1970’s, lawmakers across the country were forced to deal with an explosion of arrests for marijuana possession. Many legislators were especially concerned that young people “from good families” would live under the cloud of a felony record for the sole crime of possessing a few joints. Penalties for simple possession were punishable by time in prison and fines (amounts varied from state to state).

These concerns along with the formation of NORML in 1970 and the 1972 report by the National Commission on Marihuana and Drug Abuse – commonly called the Shafer Commission – led many state legislatures to take up the issue of decriminalization. Oregon was the first state to liberalize its laws in 1973, followed by Alaska, California, Colorado, Maine and Ohio in 1975, and Mississippi and New York in 1977.

Keith Stroup (NORML’s founder) testified before North Carolina’s General Assembly in April 1975. Although legislators listened with some interest, they made no move to act on Stroup’s advice.

Candidate Jimmy Carter expressed approval for decriminalization in 1976. As President, during a 1977 message to Congress Carter stated “penalties against possession of the drug should not be more damaging than the drug itself.”

In 1977, NC legislators determined that the time had come to address the issue again, as they debated both a liquor-by-the drink bill and a marijuana decriminalization bill. Albert DiChiara and John F. Galliher covered the history of decriminalization in 11 states, including North Carolina in “Dissonance and Contradictions in the Origins of Marihuana Decriminalization” in Law & Society Review, Vol. 28, No. 1. (1994), pp. 41-78.

Editorials in most of the state’s newspapers came out strongly against liquor-by-the drink, and that bill was returned to committee until the short session. In the few papers that covered the decriminalization bill, editorial opinion was mixed. Newspapers noted that since the mid-1960s, drug use was increasing in the state’s colleges, and that marijuana use was even more common among whites than among African Americans. The press reported on “High Noon” at the University of North Carolina in Chapel Hill where hundreds of students gathered at noon to smoke marijuana at the campus bell tower.

One senator quipped that in Rose Hill “…you can make corn liquor but with a joint you’re going to jail for two years. After football games in the Bell Tower at Chapel Hill as many as 15,000 smoked marihuana with the State Bureau of Investigation, local and county police watching. Do the same thing in Anderson, North Carolina, in the mountains and you were gone.”

Another stated, “Last summer, my nephew was busted for smoking marihuana . . . and due to the fact that maybe I’ve got somebody with clout over there, this kid got off fairly easily.” In contrast, he told the story of another “young boy” who went to prison for possession and was murdered during his incarceration. Another senator observed: “I do not believe that the majority of the people of North Carolina support the concept that fifty or sixty kids in North Carolina ought to be imprisoned for doing what thousands of others have done without any punishment at all”.

The director of corrections testified on overcrowding in the state’s prisons, and testified that there should be no imprisonment for alcohol and drug violations. A state commission confirmed that state prisons were overcrowded and the state faced the threat of federal court intervention and control. One judge said “When drug use was restricted to young hippies, we could talk about THEM. When it hits the neighbor down the street, it’s US. It’s not what we can do about THEM, now it’s what we can do for US.”

Given all these concerns, a Democratic state representative urged the attorney general to support a decriminalization bill. In July 1977 the attorney general came out in support of the bill, justifying it as a means of concentrating on hard drug sales, relieving prison crowding, and of avoiding placing kids in prison with “professional felons.”  HB 1325 was passed in the House by a vote of 59-36. The passage of this bill formalized a path away from prison for first time offenders.