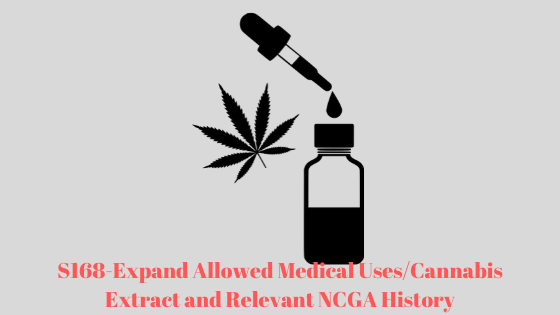 This bill continues the very limited conversation about medical cannabis which began in North Carolina’s General Assembly in 2001 when Representative Paul Luebke of Durham introduced H1240 – Medical Use of Marijuana/Study on April 11th, 2001 proposing a Legislative Research Commission to study the lawful possession, cultivation, and use of marijuana for treating or alleviating pain or other symptoms associated with certain debilitating medical conditions. https://www2.ncleg.net/BillLookUp/2001/H1240

Numerous attempts to institute a medical cannabis program or even to study the idea have foundered in multiple committees in the House and Senate, and patients’ hopes have been dashed year after year. Fourteen bills in the House and two in the Senate have proposed fairly moderate study programs or medical marijuana programs (not including the bills discussed below).

Things seemingly brightened for a small number of patients in 2014, when House Bill 1220 – Hope 4 Hailey and Friends was codified into law (Session Law 2014-53). NOTE: Session Laws are laws passed by a session of the legislature. Until such laws are added to the relevant statute or code, they can be found by their session law number.

This bill, which had broad bipartisan support and 28 sponsors, proposed a pilot study program and registry to investigate the safety and efficacy of hemp extract in the treatment of intractable epilepsy. Neurologists at UNC-Chapel Hill, East Carolina University, Wake Forest University and Duke University were encouraged to conduct studies and provide hemp extract of less than 0.3% THC by weight and least 10% cannabidiol by weight to patients with intractable epilepsy who enrolled in those studies. The Department of Health and Human Services was required to set up a registry of patients, caregivers and neurologists. Referred to Committee on Health and Human Services. The bill was ratified by House and Senate and was signed into law (SL 2014-53) by Governor McCrory on July 3rd, 2014.

The law was amended in 2015 when House Bill 766 – Amend CBD Oil Statute, another bill with broad bipartisan support proposed that board-certified neurologists may recommend hemp extract containing less than 0.9% THC by weight and at least 5% cannabidiol by weight to patients with intractable epilepsy (including adults) without enrolling in pilot studies, and that DHHS set up a database of patients, caregivers and neurologists rather than a registry. Passed both House and Senate and was signed into law (SL2015-154) by Governor McCrory.

In 2017, Senators Floyd B. McKissick, Jr., Tommy Tucker, Angela R. Bryant, Erica D. Smith, and Terry Van Duyn sponsored Senate Bill 452 – Expand Allowable Medical Uses of CBD Oil proposing that G.S. 90-94.1 be rewritten to include “epilepsy, autism, multiple sclerosis, Crohn’s disease, or Mitochondrial disease by a neurologist or by a physician with whom the neurologist has consulted about the patient’s condition.” The bill was referred to Rules on March 28th, 2017, withdrawn from Rules and re-referred to Health Care on April 25th, 2017, but went no further.

Fast forwarding to 2019 and Senate Bill 168 –  Expand Allowed Medical Uses/Cannabis Extract. A bipartisan group of senators (Floyd B. McKissick, Jr., Ralph Hise, Paul A. Lowe, Jr., Natasha Marcus, and Joyce Waddell) proposed again that G.S. 90-94.1 be rewritten to include “epilepsy, autism, multiple sclerosis, Crohn’s disease, or Mitochondrial disease by a neurologist or by a physician with whom the neurologist has consulted about the patient’s condition.” The bill was referred to Rules and Operations of the Senate, withdrawn from that committee and referred to Health Care, Judiciary, and then back to Rules. The bill passed each committee with favorable reports. As it passed through the committees, the bill was amended several times, with the final revision being presented on the Senate Floor on April 10th, 2019. A 4th edition was read and the bill passed a  vote on the Senate floor, and was then engrossed (prepared in a final form for submission to a vote of the lawmaking body after it has undergone discussion and been approved by the appropriate committees).

This redefinition seems to acknowledge that there is a difference between extracts produced from “industrial hemp” which may have no more than .3% tetrahydrocannabinol (THC) the per the 2018 Farm Bill (the bill did not address how much cannabidiol  (CBD) – industrial hemp plants might contain) and phytocannabinoid rich, low-THC strains of cannabis (which may be sourced from cannabis marijuana in states with legal medical marijuana programs or adult-use), typically containing greater than .3 – .9% THC and up to or more than 20% CBD and many other cannabinoids and terpenes.

The current law states that a board-certified neurologist “shall not be subject to arrest or prosecution, penalized or disciplined in any manner, or denied any right or privilege for approving or recommending the use of hemp extract or providing a written statement or health records to the Department for the use of hemp extract pursuant to this Article.

SB168, edition 4 extends that protection to a physician who has consulted with the neurologist about the patient’s condition.

Current law allows neurologists to recommend “hemp extract” as defined above to patients with intractable epilepsy.

SB168, edition 4 would allow neurologists or physicians working in consultation with a neurologist to recommend cannabis extract as an alternative treatment for “intractable epilepsy, autism, multiple sclerosis, Crohn’s disease, Mitochondrial disease, or a medical condition diagnosed by a neurologist for which currently available treatment options have been ineffective.”

The spirit of the law is commendable, however, the potential benefits of cannabis extend far beyond this short list of conditions. The recommended approach would be to “let doctors decide.” For patients with diseases and conditions which have no neurological component, the extra burden and expense of consulting a neurologist should not be a requirement.

Are there other treatments for which such a requirement are or would be codified into law? Again, the standard should be to let doctors (and patients) decide.

SB168, edition 4 fails to address the issue of where caregivers and/or patients are to acquire the specific formulation of cannabis extract described. NC General Statute § 90-113.105 is explicit that “On a case-by-case basis, neurologists may approve of dispensation to a registered caregiver, as approved by this Article, hemp extract acquired from another jurisdiction.” Given that current federal law does not permit interstate sales and distribution of  greater than .3% hemp products, the law places the burden and risk on patients’ caregivers to smuggle said products into NC, where they must then always keep “in close proximity to the cannabis extract, a certificate of analysis that indicates the cannabis extract’s ingredients, including its percentages of tetrahydrocannabinol and other cannabinoids by weight.”

Additionally, per SESSION LAW 2018-36, codified last session, caregivers are required to dispose of “all residual oil from the extract at a secure collection box managed by a law enforcement agency.”

SB168 attempts to be a compassionate, yet still very conservative response, to the desire of 80% of North Carolinians for a medical marijuana program.

The bill provides no legal, in-state, consistent, standardized source for this medicine and leaves far too many patients suffering needlessly. Our state’s patients should have safe, legal in-state access to a botanical medicine that is objectively safer than the litany of pharmaceutical drugs it could replace.