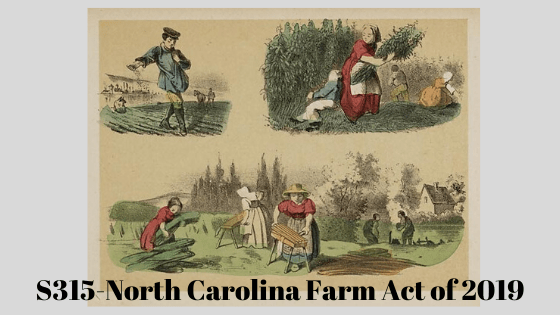 UPDATE: The bill that was ratified on 6/8/2020 and signed by Governor Cooper on 6/12/2020 was stripped of all provisions dealing with hemp.

The first hemp bill in NC was S1572-Study Beneficial Uses of Industrial Hemp, introduced May 18th, 2006, was sponsored by Republican Stan Bingham and Democrat Eleanor Kinnaird. This proposed to form “a Study Commission to Study the Industrial Uses of Industrial Hemp” including the many beneficial industrial uses of hemp (the use of industrial hemp oil as an alternative fuel and the use of industrial hemp fiber in construction and paper products); to study the economic opportunities industrial hemp provides to the State; and to consider the desirability and feasibility of authorizing industrial hemp cultivation and production as a farm product in North Carolina. This bill was included in Session Law 2006-248 “The Studies Act of 2006” but the proposed commission was never formed. NOTE: Session Laws are laws passed by a session of the legislature. Until such laws are added to the relevant statute or code, they can be found by their session law number.

Nearly 10 years later, in 2015, Republicans Stan Bingham and Ralph Hise along with Democrat Joyce Waddell sponsored S313-Industrial Hemp. S-313 began life in March, 2015 as a “blank bill” with minimal language about license plates; the industrial hemp language was inserted on September 28, 2015, and the bill was ratified the next day. The bill proposed to establish an agricultural pilot program for the cultivation of industrial hemp in the State, to provide for reporting on the program by growers and processors for agricultural or other research, and to pursue any federal permits or waivers necessary to allow industrial hemp to be grown in the State. The bill was ratified by both houses, and sent to Governor McCrory for signature on September 30th of that year. McCrory refused to sign the bill, and it became Session Law 2015-299 on October 31st, without his signature.

The bill was revised 10 times between introduction and passage through multiple committees, due to several legislators’ concerns. Most of the bill dealt specifically with hemp, but it also addressed disposition of unused utility company easements; right-of-way for left turning farm equipment; outdoor advertising of bona fide farms; renewable energy resources; including hunting, fishing and shooting in the definition of agritourism; and the North Carolina Sweet Potato Program. The bill would establish the North Carolina Hemp Program and set forth regulations for hemp farming,  possessing, handling, transport, or selling of hemp products or hemp extracts, and would allow hemp products to be transported to other states and exported to foreign nations. The bill tasks the Commissioner of Agriculture to consult with the Governor and Attorney General to prepare and submit a “State plan for the regulation of hemp production” to the Secretary of the United States Department of Agriculture.

The original bill defined hemp products as any product within the federally defined THC level for hemp derived from, or made by, processing hemp plants or plant parts that are prepared in a form available for commercial sale, including, but not limited to, cosmetics, personal care products, food intended for animal or human consumption, cloth, cordage, fiber, fuel, paint, paper, particleboard, plastics, and any product containing one or more hemp-derived cannabinoids, such as cannabidiol (CBD).

Edition 2 of the bill specified that “Hemp product” does not include smokable hemp but did not define smokable hemp as marijuana. Most of the products listed above are products that are produced by processing what was called “industrial hemp” – tall hardy plants that are grown in fields to be used specifically for their strong fiber and seeds. Male plants are grown for fiber and female plants for seed production. These plants may contain some CBD, but are not the best sources. Female plants must be pollinated to produce seeds, and once seed production begins, all the plant’s energy goes into that rather than production of cannabinoids.

Plants that are grown to produce products that contain high amounts of cannabinoids (CBD, cannabigerol – CBG, cannabinol – CBN, and terpenes) such as CBD oil or smokable hemp products are grown and treated as if they are marijuana, from clones or feminized seed. Unlike the traditional hemp plants, these PCR (phytocannabinoid rich) strains are virtually indistinguishable from marijuana. In fact, some may deem them to be medical marijuana plants that are bred with minimal THC. https://tinyurl.com/CBDvsIndustrialHemp

Here’s where it gets tricky for the legislature. Legislators do not want to inadvertently legalize marijuana, nor do they want to strangle a burgeoning source of agricultural and manufacturing jobs in the state. They may have originally pictured the hemp industry as illustrated in the picture above, but the modern picture is not so cut and dried.

Law enforcement agencies lobbied hard for smokable hemp to be defined as marijuana, and the 10th edition does state “The term “marijuana” includes smokable hemp, but does not include hemp products.”

The solution should not be penalizing adult consumers of cannabis, either hemp or marijuana.  Bills that would decriminalize possession, modeled on H766/S58 – Revise Marijuana Laws should receive a serious hearing during the 2020 short session.

It is also far past time for the General Assembly to give serious consideration to instituting a medical cannabis program that includes the right for patients and caregivers to home grow.

Criminalizing possession of cannabis (the policy of Marijuana Prohibition) does not eliminate possession, but it does cede control of selling to criminal syndicates and cartels who are not interested in regulating youth access or providing a safe product for patients or adult consumers. Legalizing adult use is another step that should be given serious consideration.