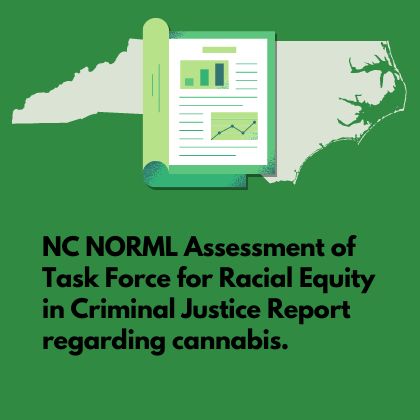 The Task Force for Racial Equity in Criminal Justice has released their report (https://ncdoj.gov/wp-content/uploads/2020/12/TRECReportFinal_12132020.pdf) of over 100 recommendations.

Members of the Task Force included a mayor, a district attorney, a judge, a public defender, legislators, law enforcement officers, state leaders, and activists. The group as a whole supported the report,  but not all recommendations won unanimous support. NC NORML advocated for legalizing cannabis resulting in several recommendations that would somewhat ease the oppression of cannabis users. However, we need to convince legislators to support the recommendations because enacting the recommendations will require bipartisan cooperation from all levels of government.

Local governments can make cannabis arrests a low priority for enforcement, but legislative action is required for the rest, including:

The Sheriff’s Association released a separate report in October which focused on changing the tactics of policing including everything from traffic stops to protest responses and use-of-force rules. Although some of their recommendations were similar to those made by the Task Force, they were silent on cannabis. https://ncsheriffs.org/wp-content/uploads/NCSA-Report-on-Law-Enforcement-Professionalism-FINAL-10-21-20.pdf

Cannabis legalization is going to require all of us sharing our stories with lawmakers so they understand the human impact of prohibition.