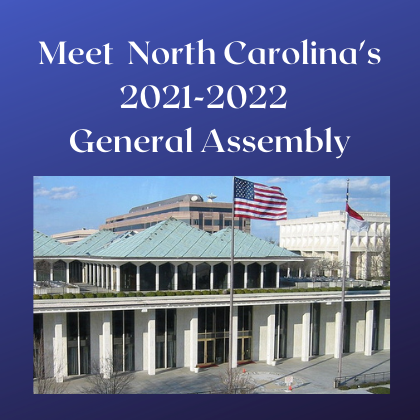 The 2020 general election results are in, and we are excited to report on the changes in the General Assembly.

Before we get to the details of the election, NC NORML is happy to report – a bit of good news! The North Carolina Task Force for Racial Equity in Criminal Justice, which is chaired by Attorney General Josh Stein and Supreme Court Justice Anita Earls,  recommended legislation to:

The majority of incumbent NC legislators ran for re-election and won handily. In districts where incumbents decided not to run again, or opted to run for other offices, their seats were generally filled by members of their own party. In the 2021 – 2022 legislative session, there will be 68 Republicans, 52 Democrats in the House; and 28 Republicans, 22 Democrats in the Senate.  The Democrats lost 5 seats in the House and gained 1 in the Senate. Republicans have retained control of both chambers.

Republicans are more socially and fiscally conservative, so our challenge is to convince them that personal liberty, increases in revenue, and savings in expenditures are reasons to change the law.  NC NORML’s strategy is to thread the needle between the two world views of rural (liberty, fiscal conservatism, small government) and urban (science, justice) North Carolinians to inform legislators about the benefits of legalization. Check out our the fact sheets for messaging examples: https://www.ncnorml.org/fact-sheets/

Many legislators from both parties have not taken a position. We must have bipartisan support to get a bill passed. Since Republicans retained control of both houses, it’s up to us to make the case to Republicans. To make this happen, every cannabis supporter must become an engaged advocate. If you know your legislator’s position please fill out our form to allow us to track their positions and inform our strategy: https://actionnetwork.org/forms/constituent-feedback

Despite the widespread support for MMJ and increasing support for legalization, reform of North Carolina’s marijuana laws does not seem to be a major factor in how North Carolinians vote. Voters are more likely to consider experience (incumbency), party affiliation, local/other state issues, and adherence to party values as more important factors.

Senator Terry Van Duyn (D) – District 49: Buncombe; 1 MMJ bill and 1 hemp extract bill; opted to run for Lieutenant Governor in the March 2020 Primary. She will be replaced by Julie Mayfield who responded to NC NORML that she supports MMJ, decriminalization, and adult use legalization.

Sarah Crawford (D) picked up District 18 (Franklin,  Wake) due to redistricting. She has not taken a position on MMJ, decriminalization or adult use legalization.

Based on the number of younger, urban Republicans who were willing to take a position on MMJ, decriminalization, and/or adult use legalization during the General Election, it is possible that future Republican legislators will be more open to changing the state’s archaic laws. Our NC NORML Smoke the Vote specialist recently spoke with Representative Kelly M. Alexander, Jr., the founder of NC’s Cannabis Caucus – Alexander believes the Caucus will grow in the next session, and he hopes to add more Republicans to the Caucus as well.

Other races with potential to impact cannabis legalization in NC:

Roy Cooper (D) defeated Dan Forest (R) and will serve a second term as Governor. When he was asked about decriminalization or legalization, Cooper expressed the desire “to move slowly and study the impact in states that have legalized it.” (10/31/16) https://www.huffingtonpost.com/entry/roy-cooper-vs-pat-mccrory-nonpartisan-candidate-guide_us_5809545ae4b0f8715789f82d

While Cooper’s response is not overwhelmingly supportive of potential change, Dan Forest was even less supportive. In response to an NC Values Coalition Questionnaire: I support the legalization of recreational marijuana? Forest answered Strongly Disagree.

In response to 2020 NC Family Policy Council’s question “Should North Carolina legalize the use of marijuana for medical purposes?” Forest answered NO

The Lieutenant Governor chairs the Senate and if we prevail to get a vote in the Senate it would be better to have a cannabis supporter chairing the debate.  Unfortunately Lt. Governor-Elect Robinson gave contradictory responses with respect to adult use legalization. His response to the 2020 NC Family Policy Council’s question “Should North Carolina legalize the use of marijuana for medical purposes?” was NO.

Cannabis supporter Jenna Wadsworth lost her run against Secretary of Agriculture Steve Troxler. Troxler’s response to the NC Family Policy Council’s 2020 question “Should North Carolina legalize the use of marijuana for medical purposes?” was NO

Since thirty-five states and the District of Columbus have legalized medical cannabis, and 15 states have legalized adult ise, NC has become more of an outlier, a fact which could put a little pressure on legislators. NC doesn’t have the benefit of a voter referendum so the only path to legalization is convincing legislators to pass a law. NC NORML has been working with legislators of both parties and we’re beginning to see results as the new general assembly will have more Republicans as well as Democrats who support medical cannabis.

In summary, to get cannabis legalized in NC every supporter must talk to their elected officials consistently. NC NORML has a growing group of advocates who have been through our Effective Advocacy course and are getting comfortable with contacting their lawmakers. If you would like to learn the secrets of effective lobbying, please sign up for one of our next sessions.