Trans-State Trade And What Other States Can Accomplish 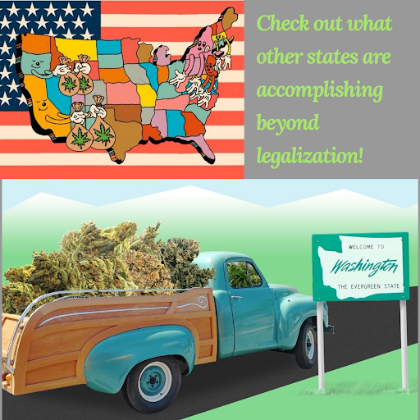 As we reflect on 2019, arguably the most important year for cannabis reform thus far, it is important to remember both the milestones achieved and the ways in which improvements can be made as North Carolina pushes for legalization.

In identifying ways in which other states are creating a thriving cannabis market, North Carolina is able to observe the positive aftermath and confirmation that the legal market is working. It is important to learn from states creating agreements with other states, or people helping people to access cannabis without legal repercussions. Many states and territories such as Arizona, Arkansas, Hawaii, Maine, New Hampshire, Oklahoma, Rhode Island, Vermont, Puerto Rico, and Washington DC accept out-of-state medical marijuana cards at dispensaries. These states and territories offer “reciprocity” for traveling patients. Some states with full recreational use such as Michigan and Nevada have even encouraged these patients to bring their medical marijuana cards for special discounts offered.

Thanks to the efforts of local advocates, Texans can now participate in New Mexico’s medical marijuana program, which is the first and only program to allow nonresidents to receive three-year cards and purchase medical cannabis while in the state. New Mexico borders five states, four with medical marijuana programs in place, and Texas, which has not implemented cannabis legalization. A Santa Fe judge’s recent ruling ordered the New Mexico Department of Health to eliminate the residency requirement to enroll in their medical marijuana program. Medical Cannabis providers, such as a New Mexico company named Ultra Health, have high hopes for this ruling to resonate across the country. Ultra Health confidently expressed their prediction of this stating “the ruling is expected to trigger nationwide cannabis reform and medical cannabis care portability”.

Oregon found themselves in an oversupply situation, but are turning lemons into lemonade by being ahead of the game when it comes to lending a helping hand to states in need of cannabis. A bill was recently passed that will allow licensed interstate transfers between consenting states predicted to begin in 2021. Oregon Senate Bill 582 was passed last year, giving the executive branch the authority to approve out-of-state transfers under agreement with other states due to the fact that it is still not federally legal. The “One Fix Campaign” bill requires 1) another state with the desire to bring the product in, and 2) some level of permission or tolerance from the federal government such as direct permission via federal statute or an indication of tolerance through a memo from the Department of Justice. Adam Smith of the “Craft Cannabis Alliance” used Illinois as an example of a state with a high demand of quality cannabis. Smith explains that “it would take years to build out the infrastructure necessary for an entirely self-contained production industry. And even then, it is unlikely that the cannabis will compare favorably on either price or quality with what’s available on the west coast or even in the illicit market. Licensed interstate transfers would allow retailers to fill shelves with world class product on day one. This will move tens of millions of consumers out of illicit markets and into regulated markets years sooner than would otherwise be possible. There is also the issue of the environmental impact of forcing every legal and legalizing state to produce cannabis at scale regardless of suitability.” Adam Smith, who was also a founder of Students for Sensible Drug Policy in the ‘90s, headed up the bill after realizing that this issue was more of a market access problem, less of an oversupply problem and that he needed to get his legislators on board. He has since pointed out that this is simply “smart policy” and that there is a path for this through the Republican party since it involves free markets which is the bread and butter of capitalism.

All states are fighting their own cannabis reform battles, such as Washington state’s continued conflict implementing home grow. We can get involved together and be a part of the green rush, or we can be complacent and let our leaders continue to make decisions as they see fit. The MORE Act is making progress, but we have the opportunity to have a say in how our state’s laws are written and reap the benefits of avoiding further government interference. The call to action is evident- that we must be proactive in creating our own laws, here in North Carolina, while we have the ability to do so.